Summertime, but the livin' ain't easy


In the midst of summer here in the heartland... if there's anyone who's periodically checking for new posts (and who's to say there's not), I should stop disappointing him or her (them, maybe?), and get back on track.
So from time to time, I will make an effort to start posting more.

A good portion of time since the last posting was spent in search of transportation. Another auto accident in April killed the Cutlass, which didn't last a year in my hands, thanks to a truck who merged into the lane I was in and didn't notice me there. 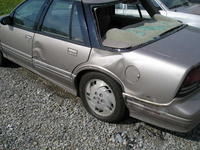 I continue to submit LENEXA to festivals, with no success as of yet - which is frustrating, but understandable due to several artistic choices I made. But then, getting anything shown is hard... my friend Jon's documentary, LATE BREAKING NEWS is finally getting some play at the Chicago Underground Film Festival, then he'll be in the KC area for its screening at the Kansas International Film Fest in September, but this has been after a year or so of submissions and rejections. I don't have thousands of dollars riding on LENEXA's discovery by a waiting public hungry for parody/satires (thankfully), so I shouldn't complain too much.

Have recently read JONATHAN STRANGE AND MR. NORRELL, and ended up liking it, although it took getting through the first 200 pages and seriously considering putting the book aside to get to that point. Some of the writing is a bit too precious, although it does convey the mood the author, one Susanna Clark, is setting. I will admit that the payoff made up for the set-up.

Burned through Andrew Vachss new novel, TWO TRAINS RUNNING, which I enjoyed immensely - a departure from his "Burke" stories, he goes into Ellroy-type myth busting with this Postwar noir parable, with a tip of the gat to Mr. Hammett. I'm sure that those who'll have some major criticisms are the type of folks who don't like A FISTFUL OF DOLLARS either. Or YOJIMBO. Or LAST MAN STANDING... well, nobody liked that, come to think of it...
Posted by L. Rob Hubb at 7/16/2005 10:54:00 PM 1 comment: