Yes indeed, blog Not Dead Yet... more cultural ephemera to come down the pike, perhaps now with a bit more regularity than previously. The following probably belongs more on the music blog, but that's taking a bit longer to resurrect. 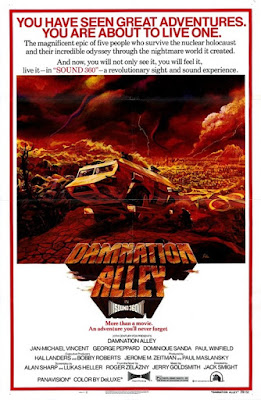 'Holy Grail' is a term frequently tossed around by soundtrack enthusiasts & collectors. Prior to the digital age, wherein it's commonplace to be able to land your hands on something that doesn't have a legitimate release, it was truly something to have a label issue a score that you loved, but had no hope of ever being released commercially.

In the case of DAMNATION ALLEY specifically, I actually saw it 4 times in theatrical release, just for the music alone. It certainly wasn't the action onscreen drawing me in - it came out in the fall after the summer release of a little film called STAR WARS, which 20th Century Fox wasn't expecting to do huge business. DAMNATION ALLEY (originally shot under the title SURVIVAL RUN) was expected to be the big science-fiction film for that year.

Yeah. Hard to believe now, I know. But DA comes from a studio formula/template of big-budget sci-fi that did business, although artistically & aesthetically it comes up short. It had a good cast, competent director, a script by two noted screenwriters based on good source material - which was practically ignored in the adaptation. And yet, looking at it now compared to STAR WARS, DA looks cheap and hackneyed, despite costing more than STAR WARS (DA's budget was $17 million compared to the relatively 'low-budget' of $10 million of STAR WARS - and that's 1970's money, kids). If you're up for some blackly-tinged humor, check out the DVD, wherein the surviving screenwriter, Alan Sharp, throws the other credited writer, Lukas Heller, under the bus blaming him for 'the bad stuff'; and producer Paul Manslansky's commentary wherein he states upfront that he never has read the novel the film is based on, which explains a LOT.

There's a precedent here - and the name of that precedent is LOGAN'S RUN.

It's held in higher regard than DA now, but it shares the same features and flaws that hamstrung DA - the biggest flaw being that they threw out a good part of what made the source material work and ended up with films with good aspects, but overall turned out mediocre. LOGAN'S RUN fares a bit better, mainly in production value

One of those good aspects was the hiring of Jerry Goldsmith, who was hitting his stride in the late 70's - he might not be as name recognizable to the general public as John Williams is, but you're guaranteed to have heard his work in something broadcast over the last 50 - 60 years - from episodes of THE TWILIGHT ZONE and themes for shows like THE WALTONS and STAR TREK:VOYAGER, and many, many films.

Most notable of Goldsmith's many great gifts is composing music that's far better than the film he's working with - when he's got a good film, he can make it GREAT; if the film is less than good, he can at least make it watchable - LOGAN'S RUN, THE SWARM, THE MUMMY, and definitely DAMNATION ALLEY. If you end up tooling around the post-apocalyptic USA in a tricked out RV dodging through massive scorpions, killer cockroaches, and depraved hillbilly survivors intent on raping your woman - but oddly, no radiation from the nuclear strikes - this is exactly the type of music to do it to.

Aside from cassette tape dubs taped from television broadcasts, the main way to hear this was to sit through the film - no LP was released at the time and although a suite was released in a box set in the early '00's, the synth overdubs were not found, which meant that a full release of the score wouldn't be possible - until now, when the tech has evolved enough to remaster the orchestral tracks and a person hired to recreate the electronic portions of the score.

I - and others - have waited 40 years for this to actually exist. Kudos to Intrada Records for once again, bringing the goods. 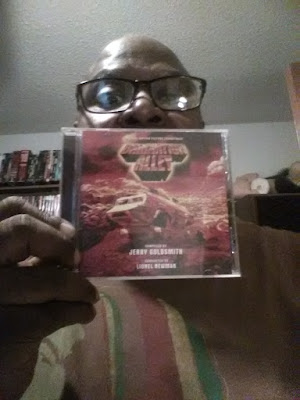 The film I went to Portland, OR to work on in the Fall of 2015 is now hitting the festival circuit - and I finally get the chance to see the fruit of our labors when the adaptation of a popular LGBT YA series gets its "Hometown Premiere" at the Out Here Now Film Festival in KC, MO on June 24.
Called the 'Hometown Premiere' because the author of the book series, Jay Bell, is from Olathe - and graduated from KU. There'll be several literary events going on involving Jay during the week, as well. It's featured as the 'Centerpiece Screening'.

More news as it comes in.

A Fistful of Paxton