ACADEMY OF DOOM! Unleashed on April 18 at KC Filmmakers Jubilee 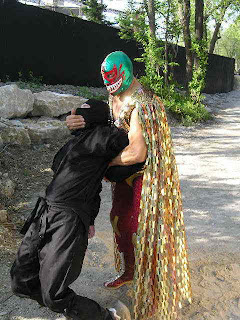 The time is ripe for KS/MO indies to finally see the light of day... just got word that this film (originally titled WRESTLING WOMEN VS. THE BRAINIAC) will debut at this year's KC Jubilee on Friday, April 18. You can check the Jubilee site for more info, once it's posted - the screening time is 11pm at the Tivoli theatre.

ACADEMY OF DOOM weaves a complex storyline involving mysterious characters and stolen brains. Shot in the psychotronic style of the no-budget Mexican “lucha” films of the early 1970s, this film tells the story of a series of bizarre murders at a famous wrestling women's academy. Appearing in a featured role is the legendary luchador, Mil Mascaras. The film was produced as an exercise in the use of technology for filmmaking by the Department of Computer Science, in the College of Engineering, at the University of Missouri-Columbia. Many of the supporting actors are MU students--who also participated in varied crew and post-production capacities.

This was directed by Chip Gubera, who did SONG OF THE DEAD - I'd worked with Chip several times before, and I was familiar with Mexican Lucha films... it was irresistible. I'm curious how the finished product will play, but if you like your movies with girls in wrestling masks, wrestling action, brain-sucking monsters, girls with flamethrowers, ninjas and dwarf assassins with jetpacks, you'll more than likely have a good time with it.

Alcohol and other substances are strictly optional.

I have to admit the jetpack assassin is what made me sign on... and the flamethrower girls were icing on the cake.

Email ThisBlogThis!Share to TwitterShare to FacebookShare to Pinterest
Labels: Academy of Doom, KC Jubilee, Mil Mascaras, Song of the Dead 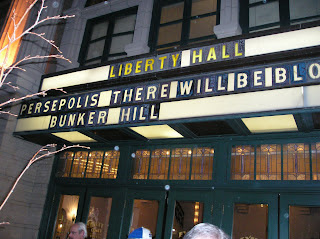 Well, I think that it was successful... there was an excellent turnout; the 7:30 screening sold out, which prompted a second screening at 10pm... and judging from audience reaction, they seemed to get the film. So it was a very gratifying experience -- as it always is, to see the finished product after so much hard work, and to see that it WORKS, and as well as you pictured it... and I'm just a cog in the wheel. The guys below should be feeling the same, x 1000. 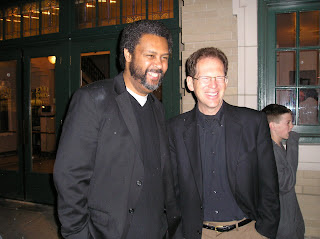 Of course, now comes the other part - selling the movie and getting it out there for the public to see, which if the public does in droves, will make EVERYBODY happy - especially potential investors for the next film.

BUNKER HILL plays out as a solid piece of entertainment, which has a bit more to offer the audience to think about, well after the lights come up and everyone heads up the aisles... It's a contemporary take on The Western, with The Outsider coming into the community, everyone confronting a situation larger than themselves, allies and enemies forming, and rough justice being dispensed before the credits roll. Kevin and Greg's take on that genre archetype was to slyly subvert it in some ways, while still paying homage; and to do a social commentary on events in the country since 9/11 .

There will be a LOT of comparisons with JERICHO -- I guess if one thinks of it in terms of great minds thinking alike (DEEP IMPACT/ARMAGEDDON, INDEPENDENCE DAY/MARS ATTACKS, 1984/BRAZIL, etc.), rather than the uninformed and knee-jerk reaction of "ripoff", one will be able to appreciate different approaches to the same premise -- two big differences in the two is the riff on the Western that BH does, and that the events that are the catalyst for the story are much more ambiguous than in JERICHO -- mainly due that ambiguity is more accepted in a two hour movie than in a television show. Unless you happen to be J. J. Abrams; but that's another post - not necessarily this one, but...

Actually I think that fans of JERICHO will appreciate BUNKER HILL, if they're open to it and can get past the taste of the bitter pill, Cancellation.

I won't get too detailed in reviewing, since I'm obviously not a neutral party... but I think that people will enjoy the film once it's available. It's another step up the ladder for Willmott - and after BH gets out, then people should be ready for the next step up when THE ONLY GOOD INDIAN is finished. More about that later in the year... maybe.