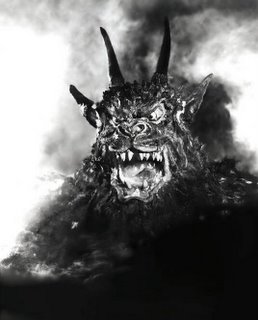 A diet of poultry does wonders for the figure...

Not only the requisite dish of crow that got served up, but judging from the figurative blood & feathers around her mouth, several members of her staff were geeked... if headless bodies start turning up in the Chicago area, you now know why.

Now if only j.t. leroy could be served up... or better yet, the entire Bush Cadre.

Some more CSA news... IFC Films should hopefully be releasing CSA into the larger arthouse markets during Feb. (AKA Black History Month -- it somehow seems a natural fit rather than BIG MOMMA'S HOUSE 2) It's currently scheduled to open Feb 15th at the IFC Center in NYC, no other dates/places are on the schedule as of yet... keep checking the IFC Films site.

If you're near the Topeka area, then you have another opportunity to see the film at Washburn University:

What if the South had won the war? Please join us (and announce to
classes, friends and family) for a screening of Kevin Willmott's
Confederate State of America (a hit at Sundance, and soon to be in general
release). This celebration of Kansas Day will take place on January 27,
2006, 7:00 p.m., Henderson 100. Commentary by Dr. Tom Prasch, History
chair, and Q & A with CSA director Kevin Willmott will follow the film, as
well as refreshments.

Owen Gleiberman called CSA, "Mind-bending! Scandalous, fearless and
hilarious." Kevin Willmott has recreated the USA as though the South has
won the Civil War, all seen through the eyes of a documentary film crew
sent from Great Britain to the Confederate States of America in the late
20th century. What do they find out? Please come and see.

Tom Averill
for the Center for Kansas Studies

I've been sick this past weekend, so it's been a good opportunity to catch up on DVD watching, the majority as of late, being dominated by TV season sets: am almost halfway through THE MONKEES Season 2 (for some reason, Netflix has the shows in hubs near the coasts rather than in the midwest, so they're taking the longest to get through); have started the TWILIGHT ZONE, 80's version (which had some outstanding episodes, and the set has some invaluable commentary tracks by Harlan Ellison) - don't confuse it with the misguided version with Forest Whitaker as Rod Serling; and surprisingly, SLEDGE HAMMER!, a show I remember fondly from the 80's, which is much funnier now, knowing a good portion of the films/shows they're parodying... all definitely recommended. After these, I'm taking a break from TV sets for awhile - the latest acquistion is NOWHERE MAN, a well-regarded show from the fledgling beginnings of UPN Network. The set is a staggering 9-disc collection, packed with extras... so it'll be awhile before tackling that monster.

Tried reading Chuck Palahniuk's HAUNTED... despite loving FIGHT CLUB and having read most of his other novels like CHOKE, INVISIBLE MONSTERS and LULLABY, I get the distinct feeling that I'm basically reading the same novel over and over again, just with slightly different characters and situations. It might be too much to call Palahniuk the 'Hanna-Barbara' of alternative lit, but HAUNTED definitely pushed me towards that concept...

Not a lot about films seen in the theater recently, you'll notice... not a lot of the interesting films tend to stick around in Topeka for long, and if it's between driving a half-hour/hour to either Lawrence or KC to see something, or scrounging in the pool of DVD's, it's a no-brainer as to which option I tend to lean towards.
Posted by L. Rob Hubb at 1/24/2006 10:55:00 AM No comments: