What. The. Fuck. BAD LIEUTENANT REMAKE

Thought I'd slipped through time, and had gone back to April 1st. BUT IT'S NO JOKE.

Project, also called "Bad Lieutenant," is due to be announced at Cannes. Production will start in late summer.

The original pic, produced by Pressman, starred Harvey Keitel and was directed by Abel Ferrara from a screenplay by Ferrara and Zoe Lund.

Story followed the depraved New York police officer of the title, who was heavily involved in drugs, gambling, sex and stealing; the pic received an NC-17 rating.

The new script's penned by Billy Finkelstein, a TV writer with credits on "Murder One," "Law & Order" and "NYPD Blue." Stephen Belafonte, who brought Finkelstein to the project, is also producing, while development was financed by producers Alan and Gabe Polsky.

I dunno... it's totally crazy - crazy enough to work? Who knows? Checking out the video above (DEFINITELY NOT WORK SAFE), and trying to picture Nic Cage in the role... 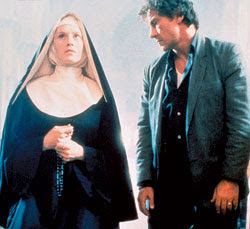 Maybe they can hire Schooly-D to do a rap about bees. This could be a total train wreck or the mind roasting film of the year.