AFTER LAST SEASON: ART PRANK OR THE SHAPE OF THINGS TO COME?

If you keep up with film blogs on the Net, then you've heard of this.... for those of you who haven't, it all started months ago when a trailer went up...

Then it was announced that it was going into release - into only 4 theaters around the country on June 6... and slowly, reviews started to trickle out, a Facebook page started attracting the curious, even an interview with the director, 'Mark Region', was published - and after all of that, it's STILL not very clear whether or not the film is the product of ineptitude, or a shrewd prank helped along by the Internet. 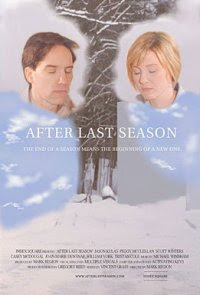 The only way to tell for sure is to see the film and judge for yourself, which by only screening in 4 theaters sort of takes that option off of the table. I do have an opinion, formed by all the evidence gathered - from the trailer, the website, the poster artwork and all of the other stuff, which accomplishes the rare achievement of not really telling you anything - and now this item regarding the release prints, that this is probably the best deadpan film prank since the news item a few years ago that Orson Welles was working on a "Batman" movie in the 1940's.

I'd still be curious to see it - though I suspect it to be a prank, I think that there is a serious intent behind it. I'm very surprised that no one has brought up BE KIND, REWIND yet.

and an example NOT connected to the film, but inspired by it:

It also brought to mind the kids who spent years making their own version of RAIDERS OF THE LOST ARK, which was a cute story and made everyone feel quite warm and fuzzy for a couple of minutes. But those were kids, farting around with a camcorder and remaking something that they'd already seen -- plus, kids, (and most people) don't have millions of dollars laying around for 'production value', which is something that a lot is invested in... after all, most of the reason given for escalating costs of production, is being able to get that 'value' onscreen. Indie films really have to make the most of 'production value' since the name of the game is to Never Let Them See You Sweat. So it's somewhat offensive if things look shoddy, or aren't up to snuff.

But there are ALWAYS exceptions.

Zachary Oberzan did a one man show based on FIRST BLOOD, then he shot FIRST BLOOD in his apartment, by himself, for the cost of $96. One qualifier - his adaptation is based on the characterization of John Rambo from David Morrell's novel, rather than any attempt to imitate Stallone.

I think it begs the question that if one can accept this aesthetic when imitating something that one has already seen, why is it resisted when someone uses that aesthetic to do 'original' work, or work that isn't based on spectacle?

I'll be curious to see if AFTER LAST SEASON makes it into any other theaters, or at least some sort of DVD release. Probably the best venue would be as a traveling art installation.
Posted by L. Rob Hubb at 6/17/2009 02:07:00 PM 1 comment: