Lost Soul - The Doomed Journey of Richard Stanley's THE ISLAND OF DR. MOREAU 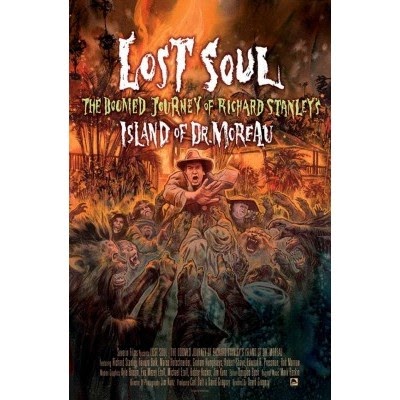 Presented as a selection of this year's PanicFest at Screenland Armour, Nortth KC.

If you've been a genre fan for the past, oh say, 25 years or so, then you have probably seen or at least have heard of the 90's version of THE ISLAND OF DR. MOREAU as being 'the worst movie ever made.

It makes a nice pull quote, but it's horseshit... anyone who actually believes that obviously hasn't seen very many movies in their lifetime. It is nowhere near that - it's actually a pretty decent time-waster, on its own terms. It is NOT among the greatest films ever made, and certainly not among John Frankenheimer's best work, but I'd watch it over his REINDEER GAMES anytime. At times, MOREAU is an entertaining, muddled batshit mess, but one guesses that it wasn't intended to be.

Even more entertaining were the stories behind the production of the film - originally spearheaded by Richard Stanley (who wrote and directed HARDWARE and DUST DEVIL and was gaining a reputation as a genre wunderkind), MOREAU was to be his first Hollywood studio backed film with a decent budget and box-office draw cast... it ended with Stanley being fired two days into shooting and replaced, one of the intended stars (Rob Morrow) leaving the production and lots and lots of weird stories circulating about what actually happened.

LOST SOUL, directed by David Gregory (Severin Films), is an attempt to set the record straight about MOREAU, to give a glimpse at what Stanley originally envisioned and to present what actually happened, as well as can be established from all of the guilty parties who consented to be interviewed. It's a fascinating 'unmaking-of' documentary that's also pretty illuminating on the age-old conflict of art vs. business.

While it is a good accounting of the production - one highlight is Rob Morrow on the record, which I believe is the first time that he's spoken about the film in any setting, and representing New Line's viewpoint is Bob Shaye (!), line producer Tim Zimmerman and production designer Graham Walker - it isn't by any means the whole story; noticeably absent from the doc is any input from David Thewlis, Ron Perlman or Val Kilmer (understandably since Kilmer apparently behaved very badly, by most accounts), and Stanley doesn't completely come completely clean about his state of mind at the time, although considering the circumstances, he was probably just barely keeping the project together.

What is apparent after weighing all the information presented is that as soon as Brando came on board and the budget expanded, the studio was looking for any excuse to remove Stanley from the film (Roman Polanski was courted for directing  duties as soon as Brando signed on, one of the little known tidbits revealed), mainly since he wasn't a known quantity in Hollywood, and had no champion on the production with any power to help support his vision. There was already pressure to 'smooth down' some of the rougher portions of Stanley's script and chances are even if circumstances had allowed him to remain as director, he would've had to make some hard compromises. And yes, the story of Stanley coming back to the set as an extra is definitely confirmed.

LOST SOUL has been on the festival circuit and will be released on DVD/Blu-Ray by Severin Films later in the year; it goes into limited theatrical release in certain cities starting on February 7, with both Gregory and Stanley doing Q&A in San Francisco, Los Angeles and Phoenix, AZ.

In another example of No One Learns Anything, Leonardo DeCaprio is producing a version of MOREAU - time will tell if  it actually happens or not.