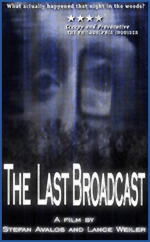 I finally got around to viewing THE LAST BROADCAST after about a decade or so. You know how it is... things to do, not enough time... I had missed it at its screening at SXSW, but I remember hearing quite a buzz about it, being the first digital feature and it was made for something like under $1000.

Then 1999 came along, and with it, THE BLAIR WITCH PROJECT, which was kinda sorta like THE LAST BROADCAST, but it was on film... and REAL, (or so I would've been convinced had I been taking in all the internet hype at the time - and had never gone camping before) and more importantly, it was picked up for distribution and made a shitload of money, and ushered in a decade of vomit-inducing camerawork and shoddy faux-amateurism all reaching for the brass ring in the hopes for a similar payoff.

Time ultimately is the final judge, no matter how good the boxoffice or hype... Others have done a much better job at documenting the history of both films - I'm much more concerned with how well they hold up now, and I have to say THE LAST BROADCAST is the more satisfying of the films. But then, both films have entirely different purposes, and both are marketed as horror films, which LAST BROADCAST isn't.

LB is a 'psuedo-documentary' (the term used when I took a class about it in film-school), and it follows the format of a documentary for a good 95% of its running time. BLAIR WITCH was sold to the audience as a "documentary", the leavings of 3 film students who disappear into the woods, but only the severely thick-headed would believe that after 20 minutes of watching it. Most of the documentary backstory was not a part of the film itself, but was used in publicity - the website, a tv special, CURSE OF THE BLAIR WITCH, which is where its resemblance to THE LAST BROADCAST is strongest.

BLAIR WITCH does fit the description of being a 'horror' film, in that taking the events at face value, it does appear to support a supernatural presence at work.
THE LAST BROADCAST, while it does play with the notion of supernatural forces present, it pretty much shoves that notion under the bus, and actually very cleverly.

What THE LAST BROADCAST is concerned with is media, and how media is used in perceiving "truth", whatever it is decided to be by whoever puts it together. At the time when it was released, "Cops" and "America's Most Wanted" were pretty much the definition of reality television; now there are entire cable networks devoted to it and almost any type of crime you can think of. The networks have their DATEBOOKS and 48 HOURS, devoted to a solid evening of murder television, all attempting to get at the 'truth' of the matter.

There's a lot to chew on well after watching LB, and there's some value in repeat viewings - it may look very crude now, but there was a lot of effort put forth in getting things to look purposely 'bad'. Those going in expecting a horror picture will be extremely disappointed, but the film ultimately is more intellectually stimulating than crowd pleasing. BW, on the other hand, didn't have anything else on its mind other than giving the audience a scare - and when substance was grafted to it, shotgun-wedding style (what Joe Berliner attempted to do with BOOK OF SHADOWS: BLAIR WITCH 2), it just didn't take.

Although both are thoroughly to blame for these goddamn 'ghost-hunting' shows currently clogging up the airwaves...
Posted by L. Rob Hubb at 3/13/2010 10:51:00 PM No comments:

Douchebags and Snotty Pricks make The Internet Go Round and Round...

Pretty silly, but I guess it's time to make A Big Statement -

What kicked this off was a comment on a review of CLOVERFIELD on Stacie Ponder's wonderful horror blog (that you should be reading) FINAL GIRL. If you've been following me for awhile, or at least checking the archives like, HERE, HERE, and of course, HERE, it's pretty evident that I don't think much of the movie enterprises connected with J.J. Abrams -- going as far as calling it 'cinema for douchebags'.

Not that it matters in the long run - everyone appears to love this stuff, much like a kitten batting a dangling toy and following a light when you shine it deep into its eyes - I REALLY, REALLY don't; going as far as to claim my remarks by name, rather than under the popular pseudonym, "Anonymous".

It doesn't win you popularity - and a couple of Stacie's readers took my 'douchebag' remarks to heart, labelling me a 'snotty prick'.

My assumption on readers of this blog, however many or few that may be - is (1) that you have a working brain and (2) you may have an opinion. At least that's how I'm couching the writing.

If you don't agree with something I've said, you can write to me about it, or you can just not read it anymore, if it's that offensive. I don't go out of my way to BE offensive for shock value, but if I strongly feel about something, I'm gonna say it and we deal with the aftermath.

With the dumbing down of society and the lack of any sort of asethetic value or conditions, "Snotty Prick" is becoming more and more of a badge of honor.

well, it appears that I have been thoroughly schooled by the two who objected to my remarks - so I won't have to worry about offending those assholes ever again. ;p