Random thoughts on THE CAR... (with soundtrack)

If you added wheels to "JAWS", put it in the setting of "DUEL" and for added kicks, got Satan in the driver's seat, you'd probably come up with something close to THE CAR.

Derided as cheezy tv fodder for years, checking this out on DVD uninterrupted reveals a good - not great, but a damn good old-school B movie that they can't seem to be able to make nowadays. 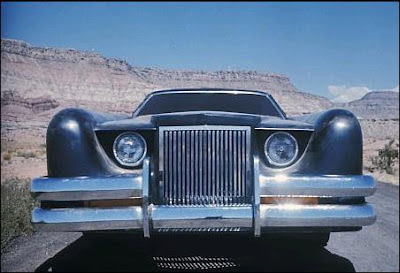 Looking like the eviler cousin of The Green Hornetmobile, it's quite easy to picture the heart attack you'd have if you looked in your rear view mirror and saw THAT on your tail. Worse than seeing the truck from DUEL heading your way.

THE CAR was written by Dennis Shryock and Michael Butler, the duo responsible for THE GUANTLET, another wonky exercise in vehicular action. There's lots of nice character stuff going on in the film... not much of it pays off to anything, but it does give a nice veneer of realism, so that when the deaths occur, they're pretty shocking.

The film was directed by Elliot Silverstein, known also for the films CAT BALLOU and A MAN CALLED HORSE, and the Twilight Zone episode, "The Obsolete Man" with Burgess Meredith and Fritz Weaver.

EddieMaxCarnage put this together: The Car and IRON MAIDEN - a match made in HELL


If you got together THE CAR with the truck from DUEL, CHRISTINE, and the Green Goblin semi from MAXIMUM OVERDRIVE, you've got a tailor made sequel for Nascar Nation.
Posted by L. Rob Hubb at 8/04/2008 09:57:00 PM 1 comment: