We're 1/4 a ways already into the New Year, with the Summer Movie Season about to get underway and already having had one big sci-fi spectacle - JUPITER ASCENDING - take a big pratfall during the Season of Dogs that is the movie season at the beginning of the year. JUPITER had money and talent behind it, lots of visual flair to make the fanboys pee their pants, and a script/story that didn't match the spectacle meant to prop it up. So it tanked - hard - and once again, the death knell for big budget sci-fi starts to toll.

What is it about big ideas that studio-backed science-fiction simply cannot get? We're years past the whole 'sci-fi is for kids' mindset that made Irwin Allen a fortune in the 60's, but Stanley Kubrick appears to be the only filmmaker to successfully work on that level. Christopher Nolan certainly gives it a grand effort (INCEPTION and INTERSTELLAR; and I'll even count Wally Pfister's Nolan-clonish TRANSCENDENCE), but just cannot stick the landing satisfactorily. Everyone else is chasing a franchise or doing requels of things that should be better left alone.

Whereas on the smaller level, sci-fi appears to get a fairer shake; there's as much cheese found as the usual studio product, but you'll also find the rare gem amongst the turds - movies like PRIMER, SLEEP DEALER, EUROPA REPORT, to name a very few. 2014 had two films of note that garnered great word of mouth on the film festival circuit and which are now available via VOD or physical media. 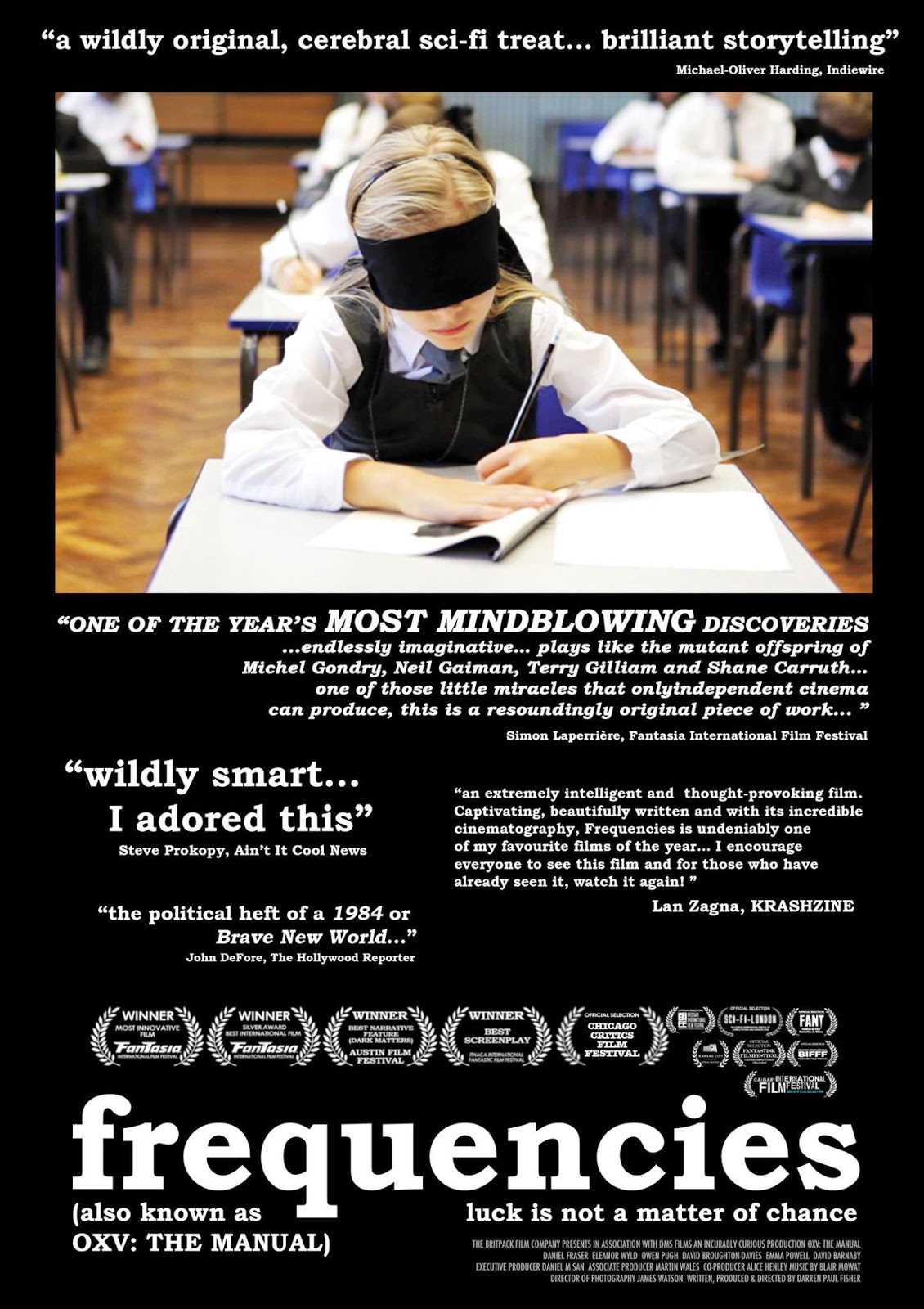 Now showing on the Showtime cable networks, Darren Paul Fisher's FREQUENCIES (AKA OXV: THE MANUAL) was a festival darling for most of 2013/14, gathering good reviews from critics and audiences alike. Set in an alternate world/time which is not quite here and not quite now; it's a universe where human beings have what is called 'frequency' - if one has a high frequency, then one would be considered 'lucky' - things will always go right for that person. If one has a low frequency, then everything will work against that person.

In this world, a person with ultra-high frequency would never meet a person with ultra-low frequency - but in a school, classmates Marie and Zak, high and low, are able to do that for exactly one minute before their environment attempts to correct that flaw in nature. For years, both continue the experiment until school is finished and they both go their separate ways. A little later, Zak and Marie run into each other again and Zak claims to be able to change his frequency. That claim and its results will eventually lead to events that change Everything...

FREQUENCIES is very clever, smart lo-key science-fiction that also plays as a clever romantic comedy - the world building is very well done, eschewing gadgetry and concentrating on the people and relationships.

Special-edition discs (Blu and DVD) are available directly from the filmmaker, although the Blu-Rays seem to go quickly, being non-region; the DVD is non-region, but PAL, so one should have an all-region player, if getting the DVD. It's packed with features including a commentary, behind the scenes feature, outtakes and deleted scene, cast auditions and director Q&A. Probably expect an R1 release in both formats later in the year. 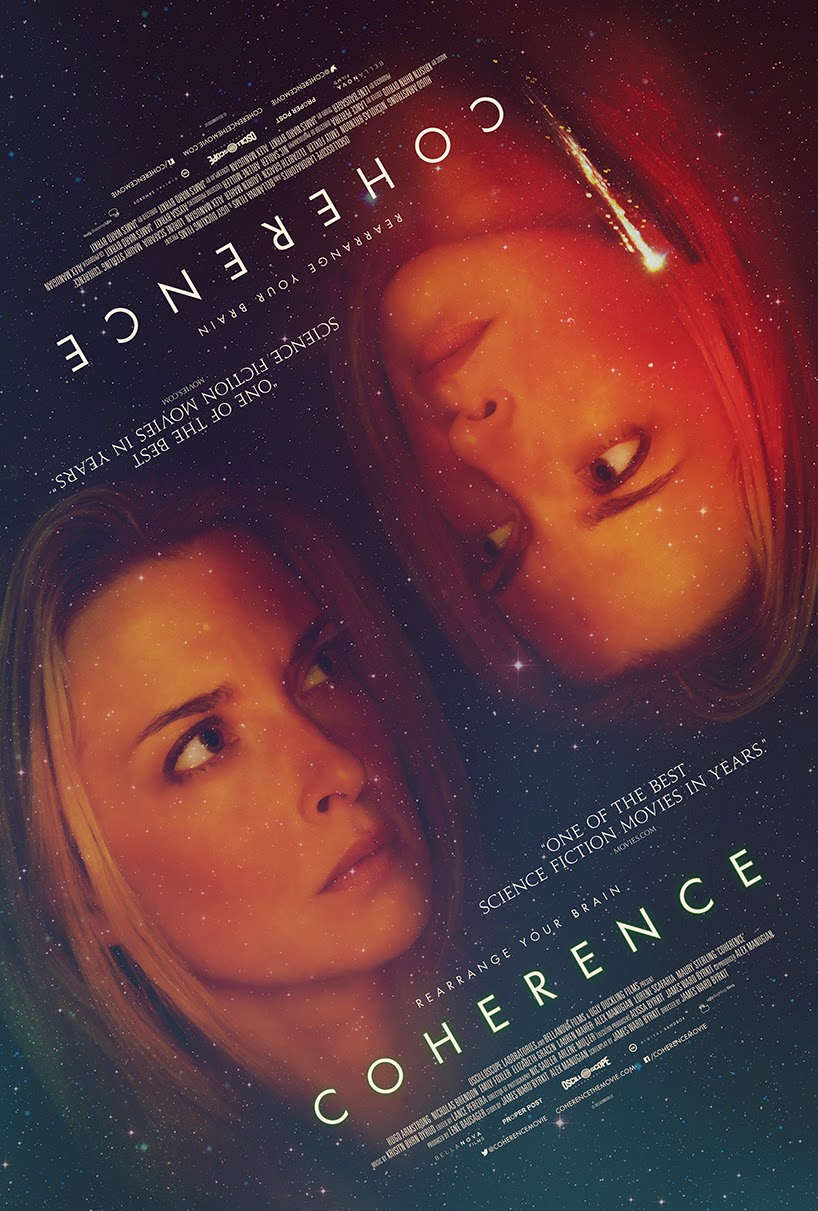 Also a festival darling for 2013/14 is James Ward Byrkit's ensemble drama COHERENCE, which also got rave reviews from critics and audiences who saw it. What starts off as a dirnner party among friends turns into something quite else due to the presence of a comet passing by the Earth. That's probably all you should know going into the movie; most of the fun is from the various turns that the story takes and the less you know beforehand, the better.

This is Byrkit's first feature, though he's no novice - he's contributed to the PIRATES OF THE CARIBBEAN series and credited with the story for RANGO, among other work on that film. He does an excellent job with his cast, which includes Nicholas Brendan (BUFFY THE VAMPIRE SLAYER, CRIMINAL MINDS) and Elizabeth Gracen (HIGHLANDER: THE RAVEN).

Oscilloscope Pictures releases the movie on DVD (no R1 Blu-Ray as of yet), with an informative commentary with Byrkit and making of featurette - and this is one picture that you will be watching multiple times.

Here's an interview with Byrkit I did for 366 Weird Movies.