Upcoming DVD's to look for

Just picked up the 2-disc set for BEYOND THE VALLEY OF THE DOLLS, and am happy as a pig in a wallow... Fox really went all out for this set, and it's nice to see Russ Meyer finally honored in a package that does full justice to his magnum opus.

from the Davis DVD news site:

Kevin Willmott's C.S.A. will be released on DVD on August 8 - I think that the movie will really find its audience in this format.

Finally making it's debut on DVD is SHOCK TREATMENT - if you read my article about it earlier, I mentioned that the title might be getting some love this year... that appears to be true, according to the specs on the package - not only will the movie getting a widescreen anamorphic transfer and Dolby Digital 5.1 & monaural tracks, but they're including 2 featurettes and a commentary by fan club presidents (though it would've been nice to have found the director... Richard O'Brien certainly wasn't going to do it). It looks as though Fox is doing right by the film, so I hope that it'll find a new audience that's appreciative of its charms. It'll be out on September 5.

Also coming to DVD is THE OTHER (9/5); and Paramount is releasing two relatively obscure, but good films: LET'S SCARE JESSICA TO DEATH (8/29) and PRETTY POISON (9/5), all of which are well worth your time and money.

Email ThisBlogThis!Share to TwitterShare to FacebookShare to Pinterest
Labels: DVD

Something Bad, Something Good

It's been an interesting week... have been gearing up to do some home improvements - my grandmother is currently visiting relatives in Chicago, so my aunt and I are taking the time to repaint her room and put in new carpeting for her while she's gone... then the other morning, we wake up to this in the front yard: 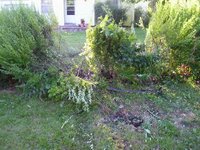 Believe it or not, we did not hear a thing... we're all very sound sleepers in my family. Sometime in the wee hours of the morning, some dufus came barrelling through the yard, not making the turn onto the other street -- luckily the ditch, hedges, and finally, the front stoop slowed him/her down and stopped them -- and lucky for the driver, no one heard or saw them - the only thing we found was the lower part of the bumper, which was torn off.

All in all, we're lucky that the stoop stopped them, and they didn't come barrelling into the front room or a bedroom - the hedges got the brunt of the damage... and hedges can grow back.

The week wasn't all bad - I got an e-mail that someone I knew from San Francisco would be in the area for the weekend... a group from NYC, Ars Subterrenea, was doing an event in Kansas City "Kansas City Confidential" and participating was John Law, who flew in from SF. 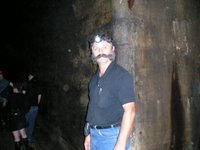 I haven't seen John since I left SF back in '96... so I definitely had to at least go over and say hello... I met Mr. Law and cohorts on Cacophony Society events, shortly after moving to SF and looking for interesting things to do. Mr. Law is a well-known citizen of the Underground, being an integral part of The Suicide Club and The Cacophony Society, and lots of other offshoots of Fringe Culture, and is easily one of the most principled individuals that I've been lucky enough to know.

I had to work on Sat., so I missed the main event -- I did get to the afterparty and tried to fit the last 10 years in the space of an hour or so... but even better was going on a Kansas City tour of a different sort - it brought back memories of fun stuff I used to do... and provided a spur to make some new memories in my current home. After all, Cacophony is Everywhere!

Not much accomplished in terms of movie watching - just got Peter Watkins' PUNISHMENT PARK from Netflix, so more about that later on after I've had a chance to see it.