So I finally watched THE DARK KNIGHT -- OK, it did live up to the Bat-hype, though I strangely have no desire to see another Batman movie. Ledger would've been nominated for the Oscar if he hadn't croaked... not sure if he actually would have won it. Possibly, but dying certainly bagged it, so to speak.

I'm still not sold on the Batman voice... it just got to be annoying.

Hats off to Chris Nolan, who certainly raised the bar on this incarnation of the Bat... but it's somewhat sad too. Remember when he did other movies other than Batman flicks? You can guarantee that'll be the kickoff on the obituary - "BATMAN director..."

Really sad to think that'll be in Michael Caine's obit too. "In addition to playing 'Alfred' in BATMAN BEGINS and THE DARK KNIGHT, Caine also had roles in ALFIE and GET CARTER back in the mid to late 60's..."

Not that this post is about Michael Caine, but he is a part of it, somewhat indirectly. What this IS about is the usual geek post about films that not very many people know about, but should. 99 & 44/100% Dead is certainly a mouthful of a title for a film... that it's very little known nowadays is a shame, since it's directed by John Frankenheimer and stars Richard Harris. It pops up on the Fox Movie Channel from time to time, as well as other sources. It's little known because it comes under that rare classification of films known as 'weird shit'... so I HAD to find it.

It appears to be a crime film... Richard Harris playing a hired gun named Harry Crown who's called in to back up a crime lord in a war against another rival crime lord. That sounds straightforward enough, but there's something that's just not... quite right.

First off, there's the ad campaign: 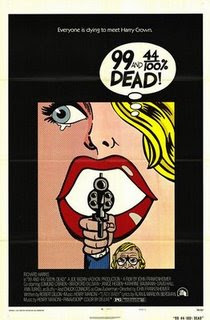 And there's the look of Harris: 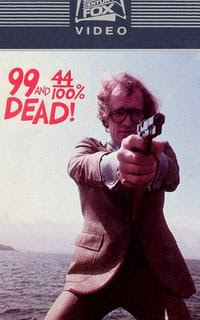 Remind you of anyone?

A somewhat tongue-in-cheek title, and a character definitely referencing a pop culture hero... this is not your dad's Mafia film. In fact, this plays very much like this could've been made within the last decade or so. Lots of matter-of-fact violence, odd touches like the city it takes place in not being very identifiable or having lots of background crowds; alligators in the sewers, pithy dialog, and strange characters, which in this case is Chuck Connors playing a rival gun, "Claw" Zuckerman. Guess how he got the nickname? 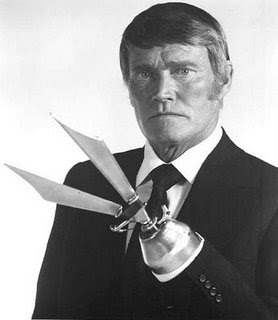 The opening title sequence and set-piece set the tone, as well as a funky score by Henry Mancini


It all may seem old hat nowadays, but in 1974 it was pretty out there. Strangely enough, this was the second such animal in Mafia crime films. 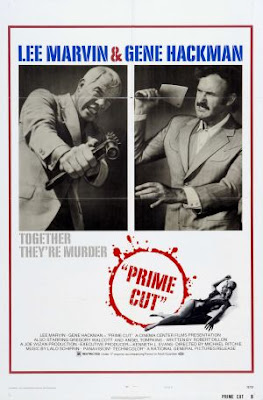 PRIME CUT, directed by Michael Ritchie was another 'weird' film done maybe a couple of years earlier than "99 & 44/100%". In a way, it's almost kind of the same story -- not surprising since both were written by the same man, Robert Dillon and had the same producer, Joe Wizan.

There are some similarities - both have as their 'hero' a legendary figure called in for a favor - in PRIME's case, it's Lee Marvin called in to collect money owed by Kansas crime boss Gene Hackman, who has a bad habit of getting rid of said collectors by turning them into sausages!