You Better Watch Out...

Christmas Season is with us yet again, and with it comes the onslaught of holiday specials, songs, and what not to get you to, dammit, BE HAPPY. And Buy Things. 'Cause Santa, and his pal, Jesus, they LOVE Happy Shoppers!

OK, a bit overstated, but as much as one can appreciate the good things about the season, it's very hard to ignore the cynicism that's not quite as hidden as it is for most of the rest of the year. Which is why, as much as I do appreciate the true spirit of the season, I tend to gravitate towards alternative Christmas ephemera - BUMMED OUT XMAS and Mojo Nixon's HORNY HOLIDAYS get as much play as the soundtracks from HOW THE GRINCH STOLE CHRISTMAS, and A CHARLIE BROWN CHRISTMAS. And as far as seasonal viewing goes, the only traditional Christmas movie I tend to like is the Alestair Sims headed A CHRISTMAS CAROL. Everything else seems to try a little too hard; and attempts to bring more modern programs into play are too hardsell (I like A CHRISTMAS STORY, but a full 24 hrs every year causes me to like it less and less; I don't even want to get started with ELF or FRED CLAUS, which I just loathe for various reasons).

So, who can I turn to, to satisfy the Cynical Monkey on my back, to justify my bad attitude and suspicion of the season?

The Europeans. As I stated last year, Santa Claus is a far, far more complicated figure in Europe than he is in America. The American Santa is pretty much sanitized and homogenized "for your protection" and to be able to push product quickly & with no questions asked.  Overseas, in the 'old country', the Santa figure is a bit tougher - hell, even the English 'Father Christmas' supplies weaponry in the family classic THE LION, THE WITCH AND THE WARDROBE.

Which makes it a great moment when there are TWO movies currently out and about where the whole concept of Santa is turned 180 from what we expect, and both have great fun in the twisting.

RARE EXPORTS, which had a theatrical run last year, is now on disc, just in time for the holiday - and it's one that the older kids can actually watch. Inspired by two short films made about the concept, the feature film is actually the prequel and fleshes out some of the background and material featured in the short films (which are included with the disc, and of course, should be watched AFTER the main feature).

It's lots of fun, with its twisting (or rather, untwisting) of the Santa legend, and adults can probably see a smidgen of commentary on commercialism and how even the most horrible things can be adapted to make an entire cottage industry. Older kids can like it because the hero of the film IS a kid, who proves to be much more on the ball than his adult counterparts. And even though things can get a bit... intense, the tone and level of scariness/violence is comparable to the original GREMLINS.

For much older kids and cynical bastards, there's SINT - it hadn't yet made it to the States after doing massive business in its native Netherlands when I mentioned it last year. IFC Films picked it up for the U.S. and has been making the rounds in limited release and VOD for the past month (it premieres in Kansas City as I write this). SAINT (English spelling) is another twist on the Santa story - one where the original Saint Nicholas wasn't that great a guy to begin with.


This 'St. Niklas' roams from village to village during the Middle Ages with his crew of brigands, pillaging and laying waste to whatever's in their way, until a group of peasants decide they've had enough and they put an end to the gang - or so they think. In revenge, St. Niklas and his crew return from beyond the grave to destroy the village (now called Amsterdam and having grown considerably) every full moon on Dec. 5th, which comes about every 32 years... which happens to be NOW.

If, while watching SAINT, you happen to be reminded of certain films of John Carpenter - say, like HALLOWEEN and THE FOG, it's not accidental. In fact, I wish Carpenter had directed something like this instead of THE WARD or that 'Masturbators of Horror' crap. It's deliberate homage that director Dick Maas treads, while also adding his black humor to the horror. Anyone who can handle the subject matter of a murderous zombie St. Nick and his minions, making it both scary AND funny but not stupid is a man to be reckoned with.

Maas isn't a well known name in the U.S., but his work is -- his previous films AMSTERDAMNED, THE LIFT (which he remade for the U.S. in 2001 with Naomi Watts, titled THE SHAFT) are a mix of horror/thriller leavened with black comedy. And he directed videos for Golden Earring - "Twilight Zone" and "When The Lady Smiles", which continue that mix. SINT is definitely NOT for the kids - and the tone will be off putting to some, but it'll be catnip for quite a few. There's a strong possibility that SAINT 2 will be coming down the road soon - and Maas already has a new thriller/comedy, QUIZ, that will premiere next year.

Pretty much the only alternative Christmas icon left untouched is Krampus (though THE VENTURE BROTHERS was the first American program to mention it, followed by SUPERNATURAL)...

... though I'm not sure that it'll ever be big in the U.S. The spirit of it, many could get behind; but it may be a bit too gruesome for Americans, who like their Christmas icons (and their politicians), to be squeaky clean and good-looking. Although, there was an attempt at an American Krampus, of sorts.
The name NACKLES will probably not mean anything to a lot of you, but for a select few, some will know that it's a short story by Donald E. Westlake (writing under the pen name 'Curt Clark') published in the early 1960's. Go ahead and read it - it's a pretty nifty piece of Christmas Chill.

When THE TWILIGHT ZONE was revived in the mid-80's, the story was planned for adaptation for its Christmas episode, to be written and directed by Harlan Ellison... but of course, things didn't go as planned, the episode did not get made, which led to Ellison walking off the show - an entertaining and complex story which is merely nutshelled here; Ellison did do an essay for TWILIGHT ZONE magazine about the entire affair, which also printed the original story and Ellison's teleplay -- all of which (The NACKLES Affair) can be found in the paperback edition of SLIPPAGE, a collection of Ellison short stories. Although we'll never see that teleplay performed (*sob*), you can, though the magic of The Internet and YouTube, get an idea how it could have looked, albeit 'Old School TZ'

A group of high school students adapted the story for a class; unfortunately, YouTube has blocked the concluding segment (due to copyright - song use, I'd guess).

Oh my... what a few months of indolence and industry will do to a blog's output... Now I'm also faced with the option of making cosmetic changes to attract new readers like flies to... well, you know. That will not happen until sometime in the midst of holiday season, I think. Until then, I bring you news of Good Things: 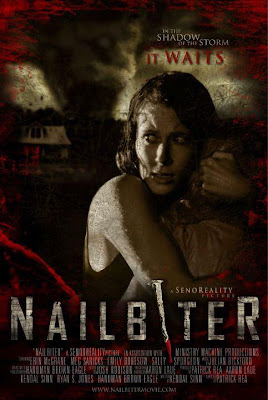 The KC Creepfest is the weekend of Oct. 28-29 and one of the main events will be the first public screening of Patrick Rea's second feature (a 'test-screening' and NOT an official premiere, so I gather), Saturday evening, with a Q & A with the filmmaker. So come on down, if you have the chance to... this has been building some buzz for quite some time, and I think that a lot of people are pretty anxious to finally see it. 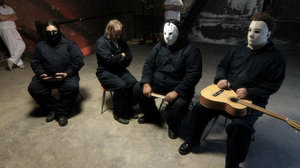 Another Halloween treat is THE SLASHER KINGS, a multimedia show from the brain of playwright Ron Simonian. A rock Supergroup comprised of the most notorious horror film characters... that's sort of bringing to life the twisted urban legend of Charlie Manson auditioning for The Monkees - and WINNING A ROLE. The show debuts Oct. 27 and runs through Nov. 6, so if you don't make it by Halloween, you'll still have a chance. The show is preceded by an introductory short film, which I'm proud to say I had a part in its production - hopefully, I'll be seeing this on the weekend and will report back.

I'd also like to call your attention to two more things....


Casey Scott has been a good friend since meeting her on location in Ohio for the film 5 YEARS [aka THE HIDDEN] back in 2000. Since then, I've slowly discovered The Cult of Casey, which has been in existence since her album CREEP CITY. It's been difficult to find some her output (Diva Machina, Red Venus Love Army), but not completely impossible. Now she's getting ready to record a new album, GLORIE INCOGNITI, and like most artists who're working outside the corporate structure, she could use YOUR support. Hence, an IndieGoGo campaign to do just that - If you'd like to find out more, or to donate, just click on the widget, which will take you to the project page and give you all the info you need.

BTW, I did the editing on the promo video, which gives you a little taste of Casey.

Actor Blake Robbins (who you've probably seen in OZ, THE OFFICE, the Hanes sock commericial, THE ONLY GOOD INDIAN and RUBBER to name a few projects) is prepping for his feature film debut, THE SUBLIME AND THE BEAUTIFUL, to be shot in Lawrence, Kansas during the winter. Blake is a wonderful talent; please check out the Kickstarter page and if it sounds like something you'd like to see, take advantage of one of the options offered.

Don't you wish every Movie Theater was like The Alamo?

Happy New Year, everyone! Yes, I know that it's just a tad late, but you know how these things are.  Personal turmoil and all that comes along with it -- The Good News is that everyone made it through surgery and they're recuperating nicely. The Christmas Miracle of December transmorgrified into January's Fresh Hell, as Christmas Miracles sometimes do.

With Spring, comes FilmFest to Kansas City - excuse me - The AMC Kansas City FilmFest, as the official titling goes. That kicks off this Wednesday, April 6 through April 10.

Here's a two-part interview with founder Fred Andrews, who provides some history, from when it started as The Kansas City Filmmaker's Jubilee to its current incarnation as FilmFest. This was intended for an article last year about the festival, but the publication it was intended for no longer exists... so, not one to waste material, it became the latest from Cheap Bastard Filmworks.

My personal picks are:


And I recommend any and all of the shorts programs.

You can find trailers for some films, as well as information about tickets and a link to a downloadable program on the FilmFest site.

Disclosure: I did work on AU PAIR, KS, and the FilmFest is the place where it will be making its world premiere, then on to festivals in Minnesota and Oklahoma.