Who are The Big House Boys?

Started watching JUSTIFIED, the new FX show based on a character created by Elmore Leonard -- two weeks in & so far, so good. The second ep briefly featured a band made up of convicts, called The Big House Boys. The featured song was pretty good, but no mention of who the band was in the credits, and checking the website wasn't helpful either.

Well, let a few days pass, and through the magic of the Internets, all is answered -- the featured song was "Castleneck" by Cliff Wagner & The Old #7, off of their album HOBO'S LULLABY. Three of the band members were featured as The Big House Boys. 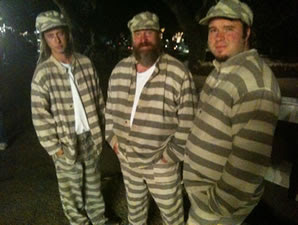 The band's website features a video for the song, as well as an earlier, less bluegrassy & more hard crunching version of 'Castleneck', as well as song samples from their albums, gig info and more.

This has been another Public Service Posting...