according to the terms of service, that is... I was lured by the listings of titles that were available (a good portion not on DVD release - like MANDINGO, for one - but you have to play them in the downloadable player, even the files that you download and burn to DVD. They won't play on a stand-alone player. And, it's only for the PC platform.

I spent the last few days up in Chicago - and like most trips, it had good & bad moments...

I've been itching to road trip again, since having the Honda serviced earlier in the year - it was in good condition; the engine running well, despite one mechanic trying to convince me that it had a blown head gasket, when all it needed was to have the hoses replaced - I'd taken short hops in the car, but no big road test as of yet.

My friend Jon, (mentioned in the Archives previously with his film "Late Breaking News") is currently working on another documentary, about the Latin School in Chicago and it's "Nazi Mind" history class, which culminates with a simulation of the Nuremberg Trials. I was asked to help out with the filming of the simulation, and I accepted, of course. 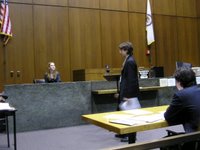 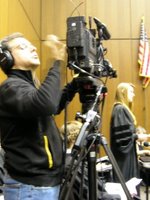 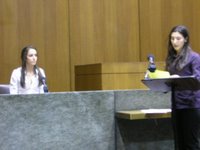 It was a 12 hour session in one of the courtrooms in the Daley Center - some of Jon's other friends & associates were helping out as well, and it turned out to be impressive, considering that these are all high school kids doing college level work - and I sure as hell never worked as hard in college. I'm now anxious to see his cut of this sometime next year.

Things went very smoothly, which was great - I put off leaving for a day, due to the snowstorm that blanketed most of Central MO and IL. Counting up the amount of semis and cars embedded on either side of the highway between KC and Columbia, MO, that turned out to be a wise decision. However, I wasn't quite free of the weather, despite the clear highways. 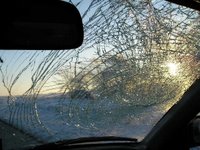 The above is the result of an ice chunk blown off of a semi that I was in the process of passing, just south of Springfield, IL
Luckily, I wasn't hurt and the window stayed intact until I made it back home to KS.
Posted by L. Rob Hubb at 12/06/2006 08:14:00 PM No comments: