Killed a lot of time over the past year being involved with programming for one of the area film festivals, which in turn killed a lot of my enthusiasm for just about anything related to film and Kansas City. So a lot of the spring and summer was hiatus time, attempting to rebuild my enthusiasm again. Number One Lesson learned - never get involved in programming unless you have complete control or at least 2 other people on the same wavelength as you; it saves a lot of stress and heartache in the end.

I've come to the point where it's immaterial to even rant against the lameness of your local film festival (exempted from this is the Free State Festival in Lawrence, which started as just a film festival and expanded this year to include other disciplines, to great success); when you have at your fingertips the ability to do your own living room festival without concerns as to attendance and cost, DIY.

Recent viewings... picked up the Scream Factory Blu-Ray release of Brian DePalma's PHANTOM OF THE PARADISE, which finally gets its proper due on a U.S. disc, and highly recommended if you have a Blu-ray player. This 2-disc release (BR and DVD) has the movie in an excellent transfer along with 2 commentary tracks (Cast members Jessica Harper, Gerrit Graham and 'Juicy Fruits' band members on one track and Production Designer Jack Fisk on the other), interviews with DePalma and Paul Williams; and the DVD is packed with more supplements including a documentary about the making of the film, an interview with Guillermo delToro interviewing Paul Williams, and more. 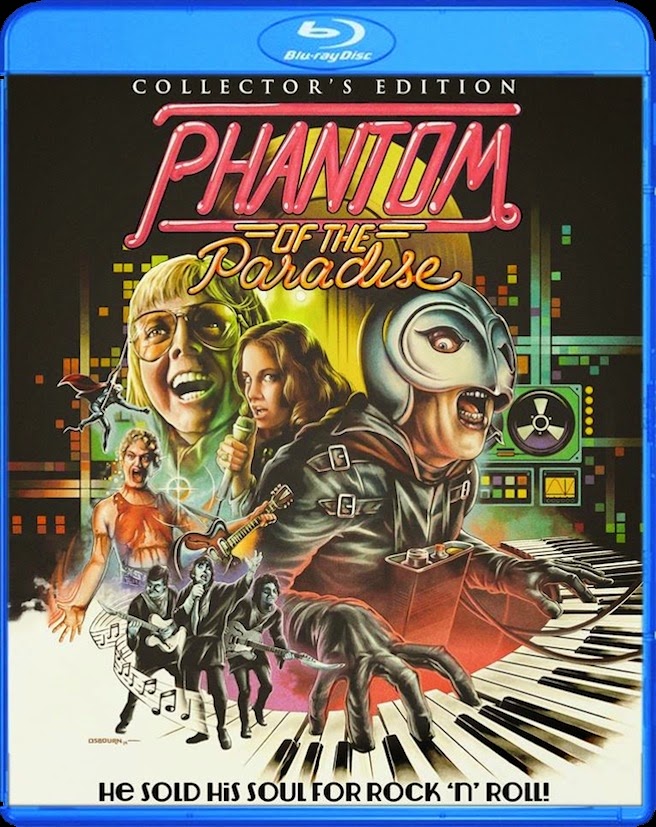 The big news in home video for the summer was the release of TWIN PEAKS on Blu-Ray. Titled "The Entire Mystery", the set puts everything that is Twin Peaks into one package, one-upping the 'Gold Box' DVD release of a few years ago by also including TWIN PEAKS: FIRE WALK WITH ME, and the coup de gras, over 90 mins. of deleted scenes from FWWM, "The Missing Pieces". 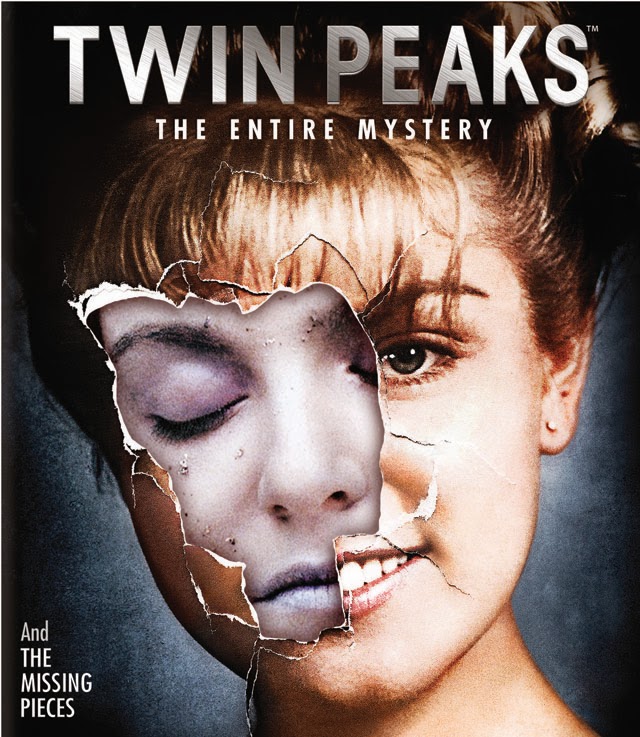 This is a magnificent effort, as you can see in the photo below, in terms of packaging... 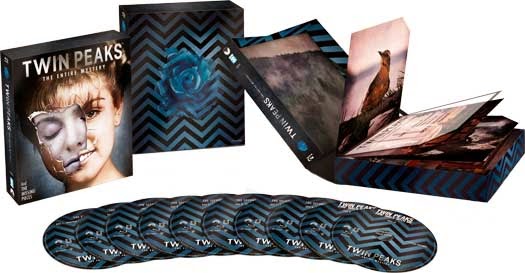 Also kudos to the technical specs - the transfers and sound are A1... it's probably not going to look or sound any better than this release. There were postings of buyers encountering some sync issues, but I didn't notice any such issues in my viewing.
If you want to upgrade to Blu, it's certainly worth the effort -- I have the original DVDs and not in so much of a hurry to dump 'em, but I will get The Entire Mystery set at some point. If you're one of the fanatics who've been clamoring for the missing scenes from FWWM, this is the only way to get 'em!

As for the show itself; it held up very well when stacked up against its current offshoots. In retrospect, it probably would have been better for the show to have done less episodes for seasons (like what USA and TNT networks do for their programming nowadays) - there's a slog of 3-4 episodes in the middle of Season 2 that may try one's patience, but most all is forgiven by the last episode.

There's always been some corn in the humor of Lynch, and TWIN PEAKS when it works, adroitly balances the light and dark elements. In the second year, it seems that characters and situations from the other Lynch/Frost show, ON THE AIR have wandered over for a visit, and it throws that balance way off. Also, I find that Joan Chen's character is really unnecessary to the goings on.

Still, it was pretty good to revisit. There are some Easter eggs hidden on the first and last discs, but nothing earthshaking. 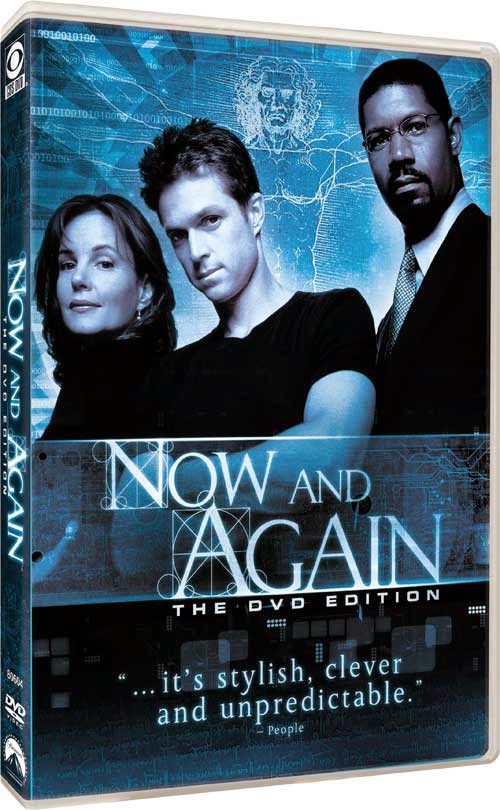 I'm a fan of the show MEDIUM, which is pretty much forgotten about now. At the time, it was a good mixture of everyday family life of a housewife whose 'gift' allows her to help solve crimes. It wasn't genre like GHOST WHISPERER - it had hints and whispers of genre in visualizing Patricia Arquette's gift, and at times, did get pretty horrific. It lasted 7 years, so the creators obviously did something right.

A few years earlier, the creator of MEDIUM - Glen Gordon Caron, who also created MOONLIGHTING - brought another show to broadcast, which also mixed family life with the fantastic, although it was much more a genre show than MEDIUM was. Its premise - an everyday family man who is accidentally killed and whose brain is utilized in a government created body, which is younger, stronger, faster, et.al. - was probably a bit ahead of its time; years later came the superhero shows and movies. Its cast was a mixture of people on their way up and character favorites (Eric Close, Dennis Haysburt, Margaret Colin, Gerrit Graham, Heather Matrarozzo and Chad Lowe & John Goodman in recurring guest roles).

It got critical notice and a cult following, and was cancelled after one season by CBS, for essentially being too expensive to shoot and not successful enough to justify the cost. For 15 years, fans of the show had to contend with dodgy dubs taped from Sci-Fi Channel broadcasts to get their fix - finally, CBS/Paramount mans up and issues the entire series on DVD, and includes two tasty extras - a 4 part documentary on the making of the show and a 'writers table' of 3 of the show's writers talking about developing the show, and what would've happened had they got the go ahead for another season.

If you're a fan of superhero/comic-book situations, you'll probably enjoy this, especially if you're looking for variations on the formula. One of the trademarks of Caron's shows is the ability to subvert the expectations of what will happen and one of the subtle joys of the show is the focus on the smaller conflicts, which are just as important, if not more, than the Big Crisis that is faced in the episodes. 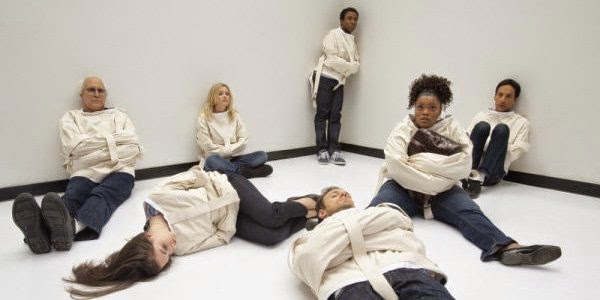 In between those, I also sandwiched in all five seasons of COMMUNITY, mainly because the opportunity to watch them all came up; and although I occasionally watched the show during broadcast, I didn't have a sense what it was about - I knew more about the behind-the-scenes goings on than anything about the actual show.

If you haven't seen it - get the season sets and START WATCHING!!

Enthusiasm now stoked, I soldier on, figuring what else to do... in between writing reviews for the film site 366 Weird Movies, some of that subject may carry over to here. I'm preparing a series on the films of Andrzej Zulawski, and will do a look into the films of local filmmaker Kevin Willmott probably after the New Year.