Adventures in the Film World - THRILL

Inspired by a recent post on Jim Emerson's SCANNERS blog, here's some artifacts from my 5 seconds of Network Exposure...

Whenever I post about working in movies, it's always been from behind the camera - I've never felt the need to be in front of it, an odd position coming from an ex-theater major who used to act regularly on stage. My last acting role was for a friend's film shot over in Scotland about a decade ago, and that project went bust, and will probably never see the light of day... if I'm lucky. It was fun, but I just cannot watch myself onscreen, and I'm certain that a paying audience would agree. But in my younger, vain days, it was a different story...

One of my last jobs before leaving SF back in 1996 was a two-day gig as an extra on a TV movie called THRILL, with Antonio Sabato, Jr. and Stephanie Kramer (of HUNTER fame). It was a staple of cable-tv for the past few years, and I actually stumbled across a DVD of it back in 2004 (which is now out-of-print, and not even available on Netflix anymore - go figure). It was shot mainly on the Santa Cruz boardwalk; the story concerns roller coaster sabotage at a amusement park, so I was part of a large group of background extras.

The first day was pretty uneventful - we didn't even get to see most of the stars, except for a small bit with Antonio and Stephanie walking along the boardwalk. But before they come into frame, someone brazenly walks through: 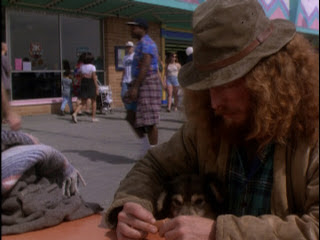 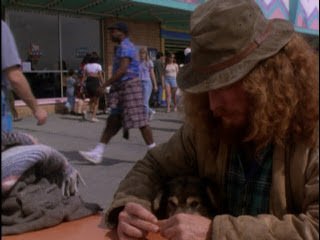 Should you ever catch this on broadcast, or god forbid, find the DVD, this turns out to be my last appearance in the film... I show up within the first 22 minutes. And the foreground actor turns out to be a very important plot point, as I learned when I first watched it.

The other part of the day was spent filming pick-ups of crowd reactions to another act of sabotage on the log flumes. They paraded several people in front of the camera to react, so I was shocked to see who made the final cut. 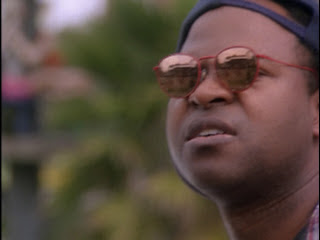 Since I was also working as an AC (camera assistant), of course, I hung as close as I could to the camera guys, who were great - the DP, Alan Caso, has gone on to a pretty good career. I remember talking with one of the AC's (whose name I cannot remember) because he was wearing a THE FANTASTICKS jacket - he had worked on the film adaptation, and I struck up a conversation with him about that (the film was shelved for a time and didn't get a release until the late 90's, in a truncated form). Oh - and the woman who was doing craft service was the mother or stepmother of Meeno Peluce.

The second day consisted of mainly standing in line - they were shooting the sequences in the building which housed the rollercoaster. Not anything with Antonio crawling around on the coaster - mainly shots of the coaster with terrified passengers coming and going (since the brakes have been sabotaged and it's unable to stop), and a couple of shots before Antonio does his hero bit. I was in the line of anxious patrons waiting to get on the coaster... and yes, shooting it was as tedious as it sounds. That was done for a good part of the day - then after lunch, I caught a break.

Bill Cobbs had the role of the grizzled old mechanical hand, and it was great getting to see him up close. For this sequence (which opens the film, as it turned out), he needed to turn to someone to get some help in stopping the roller-coaster - so I was pulled out of line, and given a blue windbreaker. He barks out a line to me, and I give a nod right as the scene cuts. 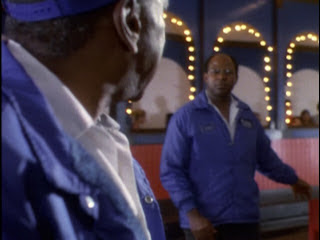 Not bad for a beginner, eh?

I had one last bit - at the end of the day, they held me over briefly as a hand double for Mr. Cobbs. Most of the closeups of him typing the computer keyboard... if they're isolated shots, they're my hands. 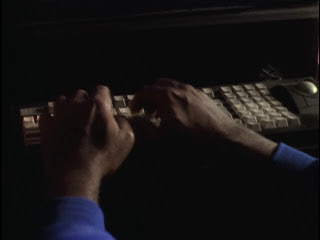 So that was it... as I recall, the production was a quick one. It was shot in March of '96 and was broadcast over the Memorial Day weekend - I remember because I was back in MO and saw a promo for it, shocked that it was ready so quickly; but then, most of the projects I was working on had long post times and wouldn't be seen until the late 90's.

And, as far as I know, this is the only movie in circulation that I appear in - I did extra in GETTING EVEN WITH DAD, but I'm fairly sure I'm not in that - never have seen the film. The only other thing that's close is that I get a mention in the commentary for John Michael McCarthy's SUPERSTARLET A.D.

I have no plans to get back in front of the camera - although I wouldn't rule out another appearance, if it was cheesy enough, I guess. 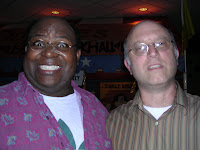