With Winter actually being... Winter, as witness to the recent snow and bone-chilling cold, it stands to reason that a lot of time is being spent in a prone position, with covers pulled up and cats at either end warming extremities.

Writing goes very slowly for me - at least in writing something that isn't an article or a review - I'm scheduled to finally have that article on Kansas filmmakers seeing print sometime later this year - I haven't pushed to really finish it yet, since everytime I think it's finished, more time and more news pops up. Taking another whack at a feature-length script is quite something else -- what was a quick n' dirty idea turned into something that I'm actually having some fun with... and that more than likely will never end up in front of a camera lens, at least in this initial version. 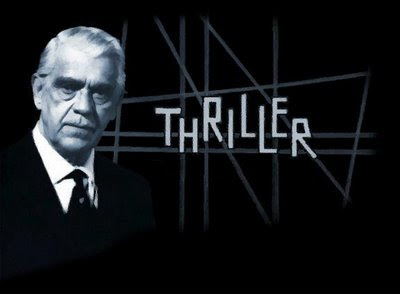 Have been passing the time by watching the old THRILLER series with Boris Karloff - which is scheduled to make its debut on legitimate DVD later this year in a tricked-out-with-extras complete run release. That doesn't mean that I should just instantly throw out my 'gift' set, which landed in my lap last year, which were taken from broadcasts on the Scream Channel.

Vintage tv like this probably has a hard time finding an audience now - most of the market for it would be the over 40 crowd, people who have heard of the show, but were born after its run; and the over 60 crowd, people who actually saw the show during broadcast. It's not quickly paced and it's in black and white, and it mainly features people who are nearly dead now - not great reasons for the under 30 set to sit down and watch it...

It's not as well known as TWILIGHT ZONE; THRILLER started out as an anthology mystery show, adapting pulp novels of the time, and it gradually drifted into straight horror... I've only delved into the first 10 episodes so far, and only one sort of had a whiff of the supernatural - an episode featuring Rip Torn, who has nefarious relatives attempting to scare him out of an inheritance.

Part of the fun of watching shows like this, is seeing established stars in the beginning of their careers, like Leslie Nielson, Cloris Leachman, Mary Tyler Moore; and actors in their waning years, like Mary Astor and Charles McGraw. Plus, it's a window into a whole other world and culture, almost -- one that I'll be doling out over the next couple of months. 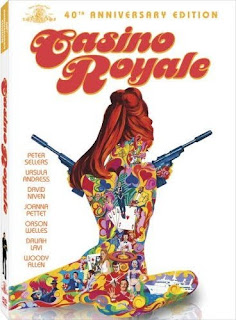 A quicker fix is CASINO ROYALE, the notorious James Bond parody of the 60's -- which is almost being pushed from memory, due to the more faithful 2006 rendition/franchise reboot with Daniel Craig. The 60's version is a mess - a glorious mess, in my opinion, but it's usually remembered as an artifact of what NOT to do in making a movie (although a successful one - it was one of the highest grossing films for 1967). It was previously released on disc a few years ago, with some decent extras, but the 40th Anniversary disc actually delves a little deeper into the film and its making, featuring a commentary by a couple of Bond scholars (which is pretty good - it was a lot more substantial than I thought it would be), and a 5 part featurette on the history of the film, and how things got out of control...

I've always wanted to run a film series for February, since it's "Black History Month", taking on the more 'in your face' films -- "GUILTY... Of Being WHITE!!" 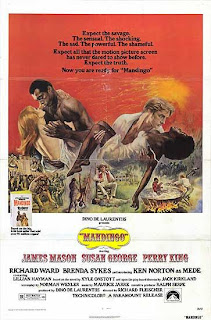 this notorious, button-pushing film, that has had some critical rethinking over the last few years, thanks to bloggers like Dennis Cozzalio (Sergio Leone and the Infield Fly Rule) and Greg Bunche, whose MANDINGO PROJECT posting will suffice as an introduction, to those who dare take the plunge and rent this baby. He goes into detail regarding the novel, and in the changes from novel to screen, and does the same for its follow-up, DRUM, another 'Exhibit', but one that's very hard to find as of late.

Book of the month for the "GUILTY... Of Being WHITE!!" series is the recently published MONDO MANDINGO, which goes into obsessive detail into Kyle Onstott's series and what they wrought.
Posted by L. Rob Hubb at 2/09/2010 05:14:00 PM No comments: