Dispatches from The Fortress of Ennui

Not a lot going on as we enter the Dog Days of Summer... sorry.

As far as film work is concerned, I have a few days on a short that a friend is shooting in August - another project I was on is currently in limbo after shooting for two days... and it looks like I won''t be landing any feature this summer. But that's how it goes in this line of work - the last cycle was at the end of the 90's where I had a lot of work from '97-'00 and didn't do any features until 2004.

I head back into the world of 'real jobs' in August -- answering phones, 'business casual' - yeah, I know, but money needs to be saved up for various things, and benefits need to be taken advantage of while they're there.

(thanx to Jon for the title; it actually should be the heading for this blog.)

In honor of ComicCon (which I've never gone to), and to provide the pop/geek culture links that I occasionally indulge, here's a postcard design for SERENITY ROSE, a comic that I've been enjoying for a bit. 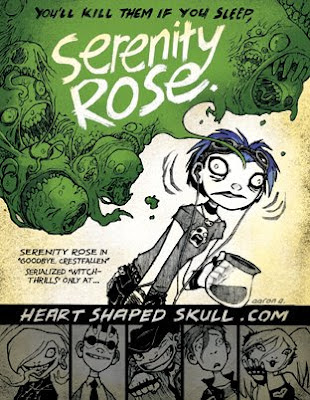 Being allergic to BatHype, I haven't seen THE DARK KNIGHT yet, though I will at some point when BatHysteria has subsided - and will catch up with some other summer fare (HELLBOY 2, WALL E) also.
Posted by L. Rob Hubb at 7/22/2008 10:43:00 PM No comments: