Heading West on the Hellhound

My trip to CA was pretty decent, except for the mode of transportation, which I had qualms about, but it was an issue of going, or not going - and of course, I had to go.

Leaving Topeka and KS was pretty uneventful, except for driving through the mass of storms. The problems started when we got of Oklahoma City. The bus was packed, due to people who had been waiting since 3pm that afternoon - it was about 9pm when we got on the road to Texas... about 45 minutes passed before we had to turn back to O.C., due to a faulty alternator.
There was talk of a bus coming up from Dallas, but that was at least a 5 hour wait!

Finally, we did get on an Eastbound bus at around 2am - early! - and got to Amarillo, then on to Albuquerque, NM, which we got to at around noon on Thursday. The next bus wasn't due out for about 5 hours, so I decided to hit Downtown, and get some decent food. 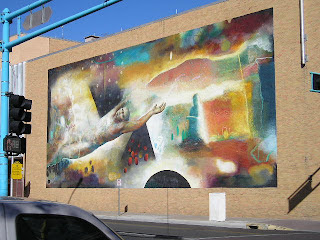 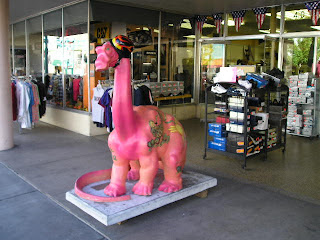 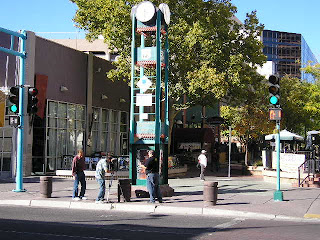 Albuquerque looked like a pretty decent place - we didn't leave until close to 7pm, and I was threatened with being thrown out of the station after I strongly expressed my displeasure at the level of service. The station people stressed that "they only sell tickets - they're not employees of Greyhound", therefore, they had no responsibility. One ticket girl told me point blank that if I had any expectation of getting to my destination in a timely fashion, I should have flown.

Had they put that sentiment in their advertising, I would've looked harder for a cheap fare. 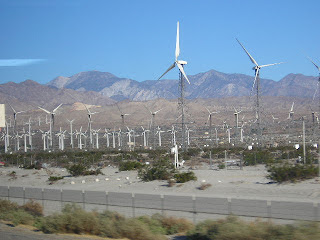 I do make it to Oakland, at 6pm Friday - a good 9 hours after my originally scheduled arrival time. I was totally burnt by the time I got to my motel. I had hoped to maybe see a couple of pepple while I was out there, but I had pretty much thrown out any grand plans by Thursday night. 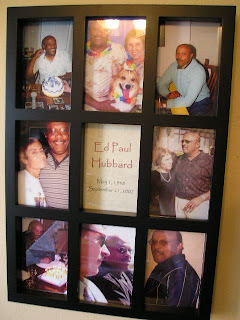 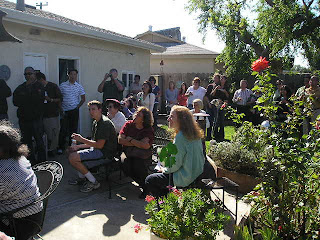 The wake was very nice - my uncle in Topeka and his family did fly out and had gotten to CA that morning. People who he'd known over his 35 years in CA came to share their memories of him.

I did get the chance to go into SF on Sunday - it was very weird, comparing my memories of a decade ago with the present. 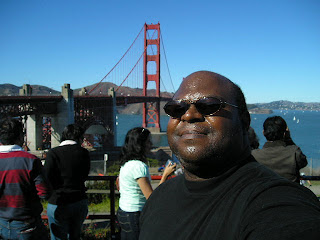 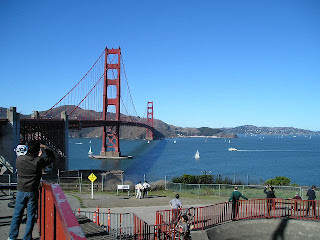 The saying is very true - You Can't Go Home Again.

Got back on Hellhound Monday afternoon, to head back to KS. Like before, the first part of the trip was pretty uneventful - we changed buses in Salt Lake City and was on the road for about 4 hours when the engine started to smoke, and we pulled off to the side in the middle of Nowhere, Wyoming. 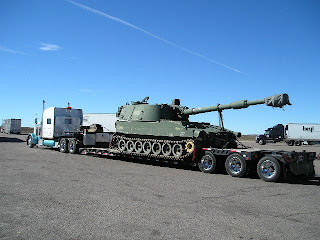 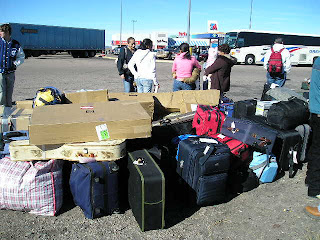 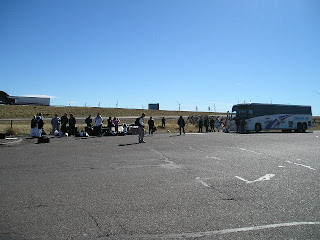 The driver got us to a truck stop which was fortunately nearby - it took 5 hours to get a replacement bus to us. Even more excitement, when the State Troopers showed up to cart off a girl who was on the bus - turns out she was part of a car theft ring and had stolen a van from the same truck stop earlier... someone there had recognized and called the police!

We got to Denver where most of us did get onto a bus that had been held - but about 7 of us didn't get on, due to the bus filling up.

You can probably guess which group I ended up in...

Overnight in a Hellhound station isn't very relaxing - most of the stations have been refurbished, or at least have flatscreen t.v.'s to entertain the sheep now. But the seats are not designed for long term sitting and certainly not for sleeping (the better to keep the homeless moving on). The Denver station locks their doors after midnight, and NO ONE gets in... if you happen to be outside and have a ticket, the steroid thug whose job is Security will not let you in... which happened to one poor bastard in our party - he had to overnight in a hotel.

I knew that ridin' the Hellhound wasn't going to be fun, but I'm truly amazed that a company whose business is transporting people over distances has seemingly adapted their business plan to the German model of the early 40's - all that was missing was someone to tattoo numbers on our arms.
Posted by L. Rob Hubb at 10/29/2007 12:20:00 AM

Ah yes, Greyhound! I have not fond memories of riding the 'Hound home to Illinois when I was in the Air Force stationed in Arkansas. The stories you hear are real! People having sex in the back, a 6 hour trip taking at least twice that long, babies drinking beer, etc. I was stuck in the Memphis bus station for several hours one time (the seats aren't made for comfort, or even sitting for that matter). The TVs back then were attached to the chairs, were B&W with a 5" screen and cost a quarter, so they have upgraded. Anyway, a guy who I assumed was homeless was preaching to all within earshot while bieng shadowed by a burly security guard. I was young and a bit less world-wise then (circa 1987), so I accidentally made eye contact and he made a bee-line for me. I quickly looked at the TV (which wasn't on) and heard a loud thump. I looked up to see the guard standing over the now supine preacher. The guard turned the unconscious preacher over, handcuffed him, lifted him up by the handcuffs (think 'you're arms aren't supposed to bend that way') and carried him off. I quickly fished a quarter out of my pocket, a lesson learned.

Sorry to hear about your Hellhound hassles, but glad that you made it out to San Fran for the wake. Greatly appreciate the story and the pictures. You should write to Greyhound with your comments and maybe even mention that you’ve posted them on your Blog. Who know, you may at least get a free ticket out of it. Oh! You should post a video rant on YouTube, then send Greyhound the address for that as well. Hope to see you at Christmas in Chicago (after a friendly and more enjoyable trip). - Jon

Okay, I see that Mr. Dramatic (in typical Dramatic fashion) has tried to one up everyone with his even more hellish Greyhound story -- FORCING me to weigh in as well. I happened to take the bus one Christmas from Carbondale to Champaign, IL -- where I would then switch buses for my final destination of Peoria. The trip was supposed to take 5 hours. It took well over 8 hours, as we stopped at every cow shed in the southern end of the state. I missed my Champaign connection by hours and ended up cooling my heels in the desolate and depressing bus station on Christmas Eve for close to five hours. BUT THAT’S NOT THE STORY! The story is that on the way to Champaign, almost every passenger we picked up was some sort of paroled prisoner on a holiday pass. At one point we stopped outside of a prison where at least 15 guys got on… and there were not 10 empty seats. On top of that an old man stereotype, straight out of the movies, named ‘Pops’ was trying to get on with some giant oil painting he’s made in the pen. There was no room for it in the bus or down below and the bus driver would not let it on. Pops about cried and the rest of the Yule time paroles about rioted. Finally the bus driver found a place for it just as blood was about to be spilled. Everyone settled down, the seats were packed, and half a dozen (at least) angry convicts stood unhappily in the bus aisle. Just then the bus driver got up, exited the bus, closed the door, and walked across the parking lot to a Wendy’s where he purchased food, sat down, and ate. We could see him from the bus. Amazingly, he was not killed upon his return fifteen minutes later. That was the tensest bus ride I’ve ever experienced. AND THE LAST BUS RIDE I EVER EXPERIENCED.