BUNKER HILL returns to Lawrence, May 9. 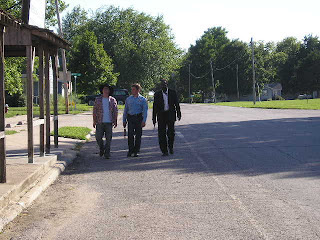 Just got this in - for those who may have missed the BUNKER HILL screening in March, it will open in a limited engagement at Liberty Hall in Lawrence, KS starting on May 9.

This is the opening salvo in BH's release, which the filmmakers are handling themselves -
as reported by Jon Niccum of the Lawrence Journal-World:

Lawrence filmmaker Kevin Willmott came to this realization: “Nobody cares about your film more than you do.”

And Willmott learned it the hard way after his second feature, “C.S.A.: The Confederate States of America,” was bought by a major distributor ... and the company didn’t quite know what to do with it.

“Filmmakers have this romanticized reality with distributors. ‘If I could just sell my movie to so and so, I will have finally arrived. I will have made it.’ That’s just not true,” he says

So Willmott decided to launch his own company in order to distribute independent, socially relevant and specialty films.

Micheaux Motion Pictures — named after pioneering black filmmaker Oscar Micheaux (1884-1951) — intends on using a hybrid model of placing its films in a network of theaters throughout the country, in addition to in-house DVD sales and barnstorming appearances by cast and crew.

The company will launch its first project today, when Willmott’s own “Bunker Hill” begins an engagement at Liberty Hall, 644 Mass.

“This is not a new idea for me,” he says, admitting he was inspired by the recording industry after established musical acts began to take personal control of their recordings.

He says, “It’s the hole in the independent film chain. You get the money on your own, you do all these things on your own, then in the end when it’s done, you sit around and go, ‘Well boss, are you gonna call?’”

Willmott is joined in Micheaux Motion Pictures by local writer/producers Tom Carmody, Greg Hurd and Scott Richardson. They settled on the Micheaux name (which is in the public domain) after working with the family of the legendary artist.

“It’s in honor of Michaeux obviously, and this is what he did at a time far more difficult than now,” Willmott says.

Next month the company will screen “Bunker Hill” at the ACLU headquarters in Washington, D.C.

“The independent filmmaker has to be proactive,” he says. “You can’t become this passive person waiting for someone to get it. Your job is to get it to the audience.”

So, it appears that BUNKER will make its way through the country for the rest of the year...
will keep up to date with it as information becomes available.
Posted by L. Rob Hubb at 5/02/2008 07:00:00 PM