SONG OF THE DEAD GETS DISTRIBUTION

I had thought that there would be no more SOTD news, since the producers started selling DVD's & soundtrack CD's directly & through Amazon.com -- but, surprise of surprises, this showed up today:

Chip Gubera and Bob Swope, the producers of the zombie-musical Song of the Dead, just signed a distribution deal with Monogram Releasing ( US Theatrical rights) and Echelon Studios (World theatrical, DVD, and VOD rights). Monogram will release Song of the Dead to several screens in the Midwest this summer through digital cinema technologies. Echelon will release the DVD to the US later this fall. No dates currently set for worldwide releases.

The “We Got Distribution” celebration in honor of the deals will be at Eastside Tavern in Columbia, Mo, May 1st 2009. Gubera’s band The Unfashionables, who performed the score for Song of the Dead, will be playing. Several of the original cast members will be performing songs that they sing in the film with the band. The celebration is free and open to the public. 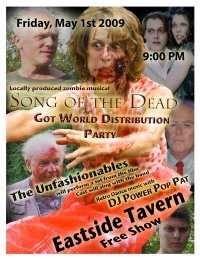 Email ThisBlogThis!Share to TwitterShare to FacebookShare to Pinterest
Labels: lo-budget filmmaking, Song of the Dead